International Blue Flag hoisted at 8 beaches across the Country

News: Minister for Environment, Forest and Climate Change has virtually hoisted the international blue flags in 8 beaches across the country. 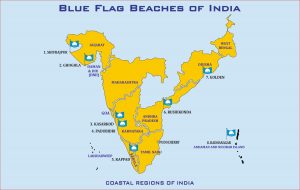 India’s initiative to get Blue Flags: BEAMS (Beach Environment & Aesthetics Management Services) ZM (Integrated Coastal Zone Management) project in order to undertake the sustainable development of coastal regions and to achieve the goal of having Blue Flags for 100 beaches in India.

News: Khadi and Village Industries Commission(KVIC) has revived the 1000 year old Monpa Handmade Paper of Arunachal Pradesh by commissioning a Monpa handmade paper making unit in Tawang, Arunachal Pradesh. The paper unit will also serve as a training center for the local youths to sustain the tradition.

What is Pneumococcal conjugate vaccine(PCV)?

What is Pneumococcal disease?

News: A team of scientists from IIT Delhi won an innovation contest (Innovate 4 SDG) organised by the United Nation Development Programme (UNDP) Accelerator Lab India for their innovation of a “plant based mock egg”.

Explained: The signature of Kahn and other foreign architects on Indian cities

News: A controversy has erupted over a decision by the Indian Institute of Management(IIM), Ahmedabad to bring down 18 dormitories built by legendary American architect Louis Kahn on the old campus and replace them with a new building.In this Context, let us look at the contributions of different architects on Indian Cities,

News: The Prime Minister of India has flagged off the country’s first ‘driverless’ metro in Delhi.

What does Driverless Metro Train mean?

News: The dry run to test preparedness for the nationwide roll-out of a COVID-19 vaccine kicked off in four States — Assam, Andhra Pradesh, Gujarat and Punjab.

For Further Read on CoWIN: https://blog.forumias.com/cowin-grand-challenge-cowin-platform-and-cowin-app/