News: The Union Cabinet chaired by the Prime Minister has approved the export of the Akash Missile system. It also approved the high-level committee formed to expedite clearance of such exports.

News: An International Report titled “Counting the cost 2020: A year of climate breakdown” has been released by Christian aid, a relief and humanitarian agency based in London.

Key Takeaways from the report: 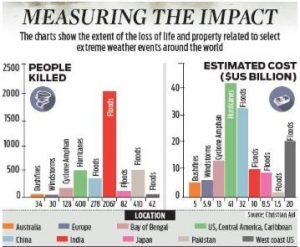 News: Defence Research and Development Organisation(DRDO) along with Indian Navy has conducted the successful maiden test trial of ‘SAHAYAK-NG’.

Key Features of the Deal:

What are the three key infrastructure projects approved? The three projects proposed by the Department of Promotion of Industry and Internal Trade(DPIIT) are: