News: Registrar General of India has released a report titled “vital statistics of India based on the Civil Registration System”.

Explained: What is a Technical Recession?

News: In its latest monthly bulletin, the Reserve Bank of India has said that India has entered a “technical recession” in the first half of 2020-21— for the first time in its history.

News: Union Ministry of Labour and Employment has notified the draft rules under the Code on Social Security,2020.

Key Provisions of the Rules: 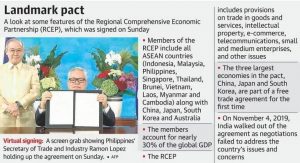 Explained: What is Ariel Space Mission?

News: The European Space Agency (ESA) has formally adopted Ariel, the explorer that will study the nature, formation and evolution of exoplanets.

WHO to setup traditional medicine centre in India

News: The World Health Organisation(WHO) has announced that it will set up a Global Centre for Traditional Medicine in India.

News: Government of India has decided to provide Rs 900 crore to the Mission Covid Suraksha.